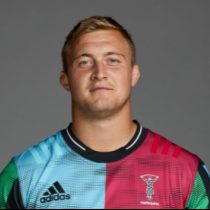 A flyhalf in his youth, Walker moved into the back-rower and eventually hooker by the time he was 14.

A former England u20 captain, Walker showed promise from a young age and signed for Yorkshire Carnegie in 2013 making his debut against Bristol at the age of 17 years and 160 days.

He won the U20 World Championship with England in 2014 and captained the side two years later in the Six Nations.

Then the busy hooker moved from Yorkshire Carnegie to Bath in May 2016, the signing caused quite a stir. A series of injuries further halted his progress.

After five seasons with Bath Rugby, Jack Walker made the move to Harlequins ahead of the 2021/22 season having racked up 70 appearances for the West Country outfit.

He signed for Harlequins ahead of the 2021/22 season. In his debut season, Walker played every single Premiership match for Quins and missed just one Champions Cup fixture.

His form earned him a call up to the England squad ahead of the tour to Australia.