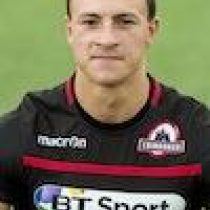 Farndale was born in Winchester and schooled at the Edinburgh Academy. He played for Scotland U20 in the 2011/12 season and was top try scorer at the 2012 IRB Junior World Cup in South Africa.

Sadly a leg break in October marred the youngster's attempts to add to his first senior competitive appearance in the last match of the 2011/12 season against Cardiff, however, he returned in time for the 2013 World Championships in France. He represented Edinburgh at under-16 level in 2009 and 2010, and was included in the extended Scotland under-17 squad that travelled to Valladolid in Spain, in 2010.

He continued with Scotland 7s in the 2015/16 season and proved a great addition to the squad in being named as Player of the Season and finishing as the side's top try-scorer.

Farndale was recognised for his outstanding season it the dark blue of Scotland, and received a call-up to GB 7s, the wider training group for the 2016 Rio Olympics.

Farndale was named Scotland 7s co-captain ahead of the 2018/19 season before being selected for the 2018 Commonwealth Games in Australia, as well as the 2018 Sevens World Cup in San Francisco.

In 2019 he signed a new deal with Edinburgh having made 7 appearances for the club.