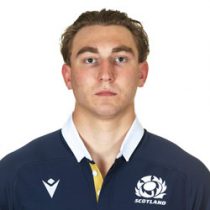 Ritchie made his senior team debut, off the bench to replace fellow Scotland under-20 player Magnus Bradbury, in Dublin against Leinster in the Guinness PRO12 match in 2014 and made his European Cup debut the following year in the win over Agen. His powerful performance in the return leg, in January 2016, earned him rave reviews.

The former Scotland under-18 captain was contracted straight from school into the club’s senior squad, such was the promise exhibited by the Strathallan School pupil and Howe of Fife player.

Ritchie has represented the Caledonia region and Scotland at under-16 and U18, taking in two FIRA-AER European Championships (2013 and 2014), before being selected for the 2014 summer U20 squad for the Junior World Championships (JWC) in New Zealand, while still aged 17.

The talented sportsman was also a silver medalist at the British judo championships in 2009, was British independent schools judo champion in 2010 and played 1st XV cricket at his school. He is one of four young players from Scotland’s 2014 JWC squad signed into the club’s senior squad for the 2014/15 season, with centre Chris Dean and wings Damien Hoyland and Jamie Farndale also competing for selection.

In spring 2015 he captained Scotland under-20 during the age grade's 6 Nations championship and continued in the squad for the 2016 6 Nations and JWC.

In October 2017, he received his first call-up into Scotland's 36-man senior squad for the November Internationals. In December he signed a new deal with Edinburgh until at least 2020 having made 39 appearances for the side. He went into the 2019 Six Nations with 6 test caps and his impressive displayed cemented his name in the following year's edition of the tournament and represented his country at the 2019 Rugby World Cup. He received player of the match against France in the 2020 Six Nations.

In Jan 2021, Ritchie committed his future to Edinburgh Rugby by signing the longest contract in the club’s history.