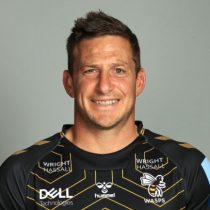 Born in New Plymouth, New Zealand, Gopperth is a ball distributing flyhalf with a dead-eye right boot. Having graduated from New Plymouth Boys' High School, Gopperth made two appearances for the Junior All Blacks in 2006.

Gopperth went on to play for both the Hurricanes and the Blues in Super Rugby.
He made 12 appearances for the Hurricanes in his debut season in 2005. Starting all of those games and scoring an impressive 139 points.

In 2008, Gopperth moved to North Harbour and signed for the Blues, but only managed 11 appearances.

After four seasons at the club, Gopperth joined Irish provincial giants Leinster. He only managed 58 games for the Irish side but scored 350 points.

In 2015, Gopperth headed back to the Premiership when he signed for Wasps. After spells at full back and his more customary position of fly-half for Wasps in 2016, Gopperth secured his future beyond 2016 with the Premiership club.

Gopperth was named the RPA Players' Player of the Year for 2017 & the Aviva Premiership Rugby Player of the Season along with the Golden Boot, as he finished the campaign as the top points scorer.

The New Zealand-born fly-half has been one of Wasps’ most reliable performers since arriving at Ricoh Arena in 2015, having amassed nearly 800 points in his time there.
.
In December 2018, Wasps announced that he had signed a new deal for the 2019/2020 season.

After 96 appearances for the Ricoh Arena club, Gopperth signed a new undisclosed deal in May 2020.

Towards the end of the 2021-22 Premiership season, Gopperth announced that he would be leaving Wasps and joining up with Leicester Tigers.