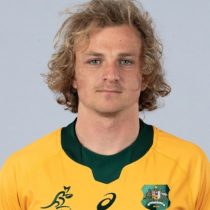 A livewire halfback, Joe Powell has shone in Super Rugby since breaking into the side in 2015 after the Brumbies' first string scrum-half Nic White was injured, signing a temporary contract and coming off the bench in the 76th minute against the Melbourne Rebels.

The blonde-haired halfback went on to play two more games that season for a club he had supported his entire life, being a member since the age of four. Following the departure of White, Powell signed with the Extended Playing Squad securing a place in the side for pre-season.

2015 proved to be a massive year for the young Canberra halfback as he shone in the National Rugby Championship and was awarded as the Canberra Vikings Best Back award.

He would become a permanent fixture at the Brumbies a year later as he signed a two-year contract with the Brumbies further cementing his place in the side, and has ascended to the match day 23 appearing on four occasions off the bench.

Tomas Cubelli joined the Brumbies to replace White after he left the Brumbies and once again Powell continued to build under the more experienced halfback. In 2016 Powell played 50 minutes of Super Rugby completing 43 passes, and continues to learn as much as possible from the starting scrum half and Internationally capped Cubelli.

In 2016, Wallabies coach Michael Cheika named Powell in his extended squad ahead of the England Test series in June, no doubt receiving inside knowledge from then Brumbies coach and Wallabies assistant coach Stephen Larkham.

A local Canberra product, Powell attended the famous Marist College in the ACT, a veritable rugby hotbed in the National Capital. Powell cemented himself as the Brumbies starting halfback in 2017 and a test debut would come soon after as he replaced Will Genia against Fiji.

Powell continued to perform for the Brumbies and remain on the fringe of the Wallabies squad. An ever-present in the team Powell guided the Brumbies to the 2019 Super Rugby semi-finals and crossed for a brace of tries, scoring against the Sunwolves and Sharks at GIO Stadium, showcasing his support running and ability to see a gap.

By June 2020, Powell has 63 Super Rugby caps for the Brumbies and has four test caps to his name.