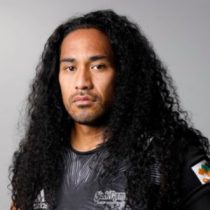 Tomane a coffee hating, car loving watch addict known for being a strong outside-back who can play outside centre, wing or fullback, Tomane put the competition on notice with two sensational tries against the Highlanders at Canberra Stadium, his first since returning to the game he grew up with.

With such brilliance on display at the 2007 National Championships, Tomane was quickly snapped up by the Melbourne Storm in the NRL where he spent his formative years learning the tricks of the professional trade.

A move two seasons later to the Gold Coast to be closer to family in Brisbane finished his league career, with Tomane opting out of the final six months late in 2011 to join the Brumbies in Canberra. He broke onto the international scene in 2012 with a try saving tackle against Scotland.

The mercurial winger needs little more than an inch to find the try line, as demonstrated when showing off his aerial acrobatics to get the ball inside the corner flag. Match that with his lightning pace and natural talent, it is hard to put a limit on this guy’s potential.

He has amassed 17 caps for Australia and has been selected for the 2015 Rugby World Cup squad. He played 68 times for the Brumbies in Super Rugby scoring 25 tries. In June 2016, Tomane was announced as one of Jake White's new recruits for Montpellier's 2017 season in the Top 14.

Tomane played 44 times for Montpellier scoring 16 tries and his final game with Montpellier was in the TOP14 Final against Castres when he came off the bench. In June 2018, the Australian back signed a deal with Leinster Rugby from Montpellier.

Tomane spent two years at the club helping the side win the PRO14 title. He made 21 appearances for the club scoring 3 tries before he left the club in June 2020.