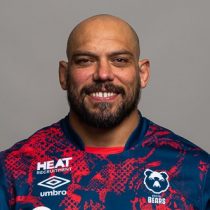 From the very outset of Afoa’s career, it was clear that he was a player of immense capabilities, most notably his scrummaging.

Afoa represented New Zealand at under 16, 19, Under 21s as well as the New Zealand Schools

He was part of New Zealand’s triumphant Under 21 World Cup side in 2003 and was selected in the team of the tournament.

Afoa’s impressive form for both Auckland and New Zealand underage sides saw him secure a contract with the Blues, whom he made his debut for in 2004. In seven years, Afoa made 101 appearances for The Eden Park Club.

His impressive Super 14 performances saw him make his All Blacks debut in 2005.

The powerful tighthead was included in the All Black squad that went on to claim the William Webb Ellis Cup in the 2011 Rugby World Cup.

After the World Cup Afoa left the Blues and signed a deal with Ulster where he spent two and half seasons before joining English Premiership club Gloucester.

The 36 cap All Black went into the 2017/18 season looking to reach a century of appearances for his club.

In January 2018 Bristol announced that Afoa would be joining the club ahead of the 2018/19 season.

He joined the club at the back of 105 appearances for Gloucester, scoring 35 points.

In April 2021, Afoa was appointed as Bristol Bears' Scrum Coach, alongside his playing commitments.