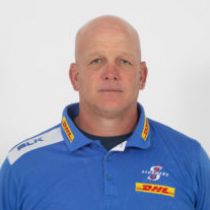 A hooker in his playing days Dobson represented WP along with a number of clubs in the Western Province leagues.

His coaching career has taken him to Italy where he was the Technical Director of Roma and he coached the Ikey Tigers in the Varsity Cup before taking the reigns at WP U21 level.

He has a Law Degree and two masters degrees plus an author and so far published two novels, Year of the Gherkin in 2012 and Year of the Turnip in 2016.

The highly-rated coach kicked off his coaching career with Ikey Tigers in the Varsity Cup where he lead them in their first three years in the competition. He guided them to the final in the inaugural 2008 season, where they lost to Western Cape rivals Maties and helped them reach the play-offs again in 2009, losing 17–19 to NWU Pukke in the semi-final.

He guided UCT Ikey Tigers to the final of the 2010 Varsity Cup, where a repeat of the 2008 final also saw the same result, with Maties winning their third title in succession

His results with Ikeys lead to him being appointed as the coach of the Western Province U21 side and more success followed as he helped them win the 2010 Under-21 Provincial Championship in his first season in charge. He returned as a technical adviser to his former assistant Kevin Foote for the UCT Ikey Tigers' 2011 Varsity Cup campaign, which they won for the first time, beating UP Tuks 26–16 in the final. He also took over Western Province's Vodacom Cup team and helped them to a quarter-final spot in 2011.

Western Province won the Vodacom Cup under Dobson's tutelage for the first and only time in 2012, beating five-time champions Griquas 20–18 in Kimberley and Dobson reached another final with the Under-21 side, but they fell short to the Blue Bulls.

Dobson continued to produce with the Western Province youth and Vodacom Cup sides before and in February 2015, he was appointed as the head coach of Western Province's Currie Cup for the 2015 Currie Cup Premier Division, taking over from Allister Coetzee, who departed to Japan to take over at the Kobelco Steelers. In his first season of charge, he guided Western Province for the Currie Cup final – their fourth consecutive final appearance – but they fell short, losing the final 24–32 against the Golden Lions.

In 2017, he managed to win the Currie Cup before losing the final to the Sharks a year later.

His continued success in the franchise saw him being unveiled as the new head coach of the Stormers ahead of the 2020 Super Rugby season.