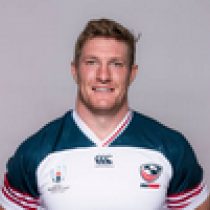 Quill began his rugby career at Dolphin RFC and became the side's top scorer for two seasons and club Player of the Year in 2012.

He joined the London Irish Academy in July 2013 with his eyes set in gaining a full-time contract. The flanker battled through injury during his time at the academy and after a few months he returned to his former club, Dolphin RFC where he put together an impressive string of performances.

In February 2014, Quill signed with London Welsh of the RFU Championship, and was released by the club at the end of his first season after helping them achieve promotion to the Premiership.

Quill was selected for the USA Eagles's 2015 World Cup squad as well as the squad that would compete at the 2017 Americas Rugby Championship.

In May 2017, Quill was named in the USA Men's Eagles squad for the Summer Series and Rugby World Cup 2019 Qualifiers in June and July, after winning 19 caps.

He was named in USA's squad for the 2019 Rugby World Cup, with his game time coming to an early end through suspension.

In November 2019, he announced his international retirement after 37 caps and 5 tries scored for the USA.