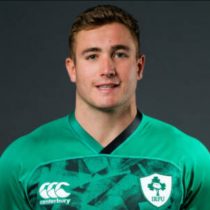 Larmour first came to the prominence as he starred for St Andrew’s College in various Leinster school's cup campaigns.

As a traditionally strong hockey-playing school, he represented St Andrew’s at both sports from first year and would go onto win All-Ireland titles and Ireland underage caps during his time in Booterstown.

Larmour attentions swayed towards rugby in fourth year when he was selected for the Irish U18s squad.

He became the second-youngest player to score a World Cup try for Ireland after Brian O'Driscoll (20-254) on 2 October 1999 against USA.

After completing his Leaving Certificate last year, he earned a place in the Leinster sub-academy and regularly trained with the senior panel as well as lining out on 6 occasions for the A side in the British and Irish Cup.

Following on from the behemoth that was Andrew Porter, Larmour is an electrifying outside back that also enjoyed that honour of being called into senior Ireland training at Carton House under Schmidt.

He excelled during the 2017 U20 Six Nations championship, capping off an outstanding championship, playing on the right wing in Ireland’s first three games – scoring two tries against Italy – before a move into fullback for the clashes with Wales and France.

A St. Mary’s College RFC clubman, Larmour was a member of the Leinster sub-academy and progressed onto a full academy contract with his native province.

He made his Leinster senior debut in the opening round of the 2017-18 Pro14 away to Dragons, scoring a try on debut.

In January 2018, uncapped Larmour was named in Ireland's 36-man squad for the 2018 Six Nations tournment, where he made 3 appearances.

With 13 appearances to his name, he was selected in the Ireland RWC Training Squad following the completion of the Pro 14 season.

He went into the 2019 Champions Cup with 15 points in the tournament and 10 points scored.

Larmour secured his name for the 2020 Six Nations Ireland squad with 21 caps under his belt.