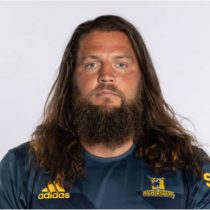 Hohneck began his career with Waikato and then Bay of Plenty, before being picked up by Super Rugby franchise Waikato Chiefs before making the move to Dunedin and representing the Highlanders.

Hohneck is a mobile and versatile prop with a high work rate and abrasive attitude. He is an experienced prop who was part of the impressive Highlanders side that lifted the Super Rugby trophy for the first time last season.

He left the club after 4 seasons to join Mitre 10 Cup side Otago.