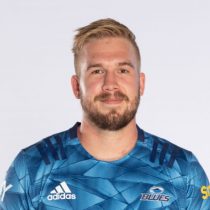 He was part of his local United Kawakawa club before he and his twin brother Jack moved to Mount Albert Grammar in Auckland.

The twins were both selected for the New Zealand Under-20s, with Jack now playing for Canterbury.

With a solid record of impressive performances, Goodhue was named in the Provincial Barbarians side to face the British & Irish Lions in their tour opener in Whangarei on June 3.

Goodhue started the NZ Provincial Barbarians match against the Lions and made 2 Super Rugby appearances for the Blues in 2017.

The big lock's performance in 2017 led to a Super Rugby contract with the Blues for the 2018 season.

The big lock from the far North made strong progress with the Blues in his 2019 Super Rugby season.

Ahead of the 2020 Super Rugby season, he looks to continue with his strong performances with the hope of joining his brother in the national setup in the near future.