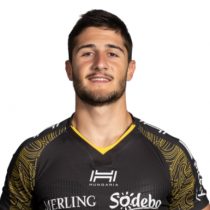 Favre arrived at La Rochelle in 2017 from RC Morteau at the age of 18. He played his first season for the Academy side before he broke into the side during 2018/2019 season.

He played his first match in the first team on August 25, 2018 against Grenoble, at the Stade Marcel Deflandre. He played 17 games for the side in his first season in the senior squad, including 10 starts.

He also represented the French u20s during the 2019 U20 Six Nations and entered the 2019/20 season as a full time senior squad member.

As of September 2020, he has made 31 appearances for the Yellow and Black and has scored 15 points.