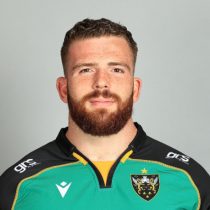 Tighthead prop Karl Garside began his rugby career at Oaklands College and featured in the RFU’s AASE League, playing against the likes of future Saints teammate James Grayson.
At club level Garside joined National One outfit Ampthill & District from Old Albanians in 2017, and has also represented Hertfordshire and England Counties.

He became Saint #1997 in October 2018 while on loan from Ampthill when he made his full debut against Bristol Bears in the Premiership Rugby Cup, before he notched up four further first-team appearances that season – earning himself his first professional contract in the process to join Northampton full time.