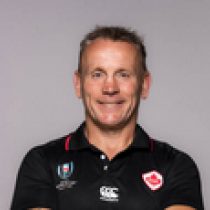 Jones is a product of Gwent rugby. He has coached several teams in his career, ranging from domestic clubs in England and Wales to the national Russian team.

As a player he won 10 caps for Wales between 1996 and 1998, once as Captain and is the last Gwent born player to lead Wales from a Gwent club.

Jones has Captained every side that he played for including Wales and Wales A, he has also represented the Barbarians vs Ireland and Scotland in 2000 and went on to coach them in 2010 whilst they played England and Ireland.

His coaching career began at Doncaster Knights, where he spent one season as a player coach before moving to Sale Sharks as forwards coach.

He was later promoted to head coach before moving into the role of Director of Rugby. During his seven years with Sale they won the European shield in 2005 and the Premiership in 2006.

In 2011 Jones was appointed as head coach of Russia, leading them to the 2011 world cup and to the final stages of 2015 Rugby World Cup European qualifiers.

Jones took up the role of an assistant coach with Newport Gwent Dragons in 2013, and in 2014 Kingsley Jones took up a position as head coach of the Men of Gwent.

In June 2017, Jones left his coaching duties with the Dragons behind to take up a new role with the WRU, heading up the WRU exiles programme which aims to ensure any Welsh qualified players playing in England and elsewhere are known to the union where he later took on the Head Coach role for Canada