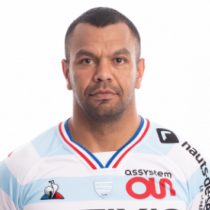 It's not often that a schoolboy sensation will live up to their hype but in the case of Kurtley Beale, he certainly has. Beale spent his youth playing rugby league in New South Wales before converting to rugby union.

Beale was an instant hit as he spent all three of his senior years playing first XV for St Joseph's College where he shone as a first five. He was selected in the NSW and Australian Schoolboys representative rugby teams between 2004 and 2006 and in 2006 he captained both the Joey's first XV and the Australian Schoolboys side, and regularly attended training sessions with the NSW Waratahs from the age of 15.

At 16, Beale signed with the Waratahs and at 17 he attended his first Wallabies training camp on the invitation of coach John Connolly. His superb skill in the No.10 jersey saw Beale signed with the NSW Waratahs in 2007, debuting for the club that year and becoming the first choice flyhalf by 2008. He was earmarked as a future Wallaby from an early age and success at schoolboy level was followed by a Super Rugby debut in 2007 at the age of just 18

With the launch of the Australian Rugby Championship in 2007, Beale became the starting flyhalf for the Rams and played every game of the season in which the Rams went on to become minor premiers. One of the top try scorers and leaders in try-assists, he was awarded the 2007 player of the tournament award for the ARC.

Injuries interrupted Beale's involvement with the Australian u20s but he did represent the side in both 2008 and 2009 with his senior test debut coming off the bench against Wales in 2009 and was later honoured as Australia’s Rookie of the Year. Beale alternated between fly-half and inside centre for the Waratahs, but eventually settled at fullback by the 2010 Super Rugby season.

He earned his first Test start against Fiji the following year before appearing off the bench against England and Ireland. He struck a rich vein of form in the 2010 Tri-Nations and began the 2011 Super Rugby season at fullback but also returned to fly-half as cover and went on to play an integral part in the Wallabies side that finished third at the 2011 Rugby World Cup. In a surprise move, he switched south to the Melbourne Rebels in 2012 but injuries limited his contribution in his first Super Rugby campaign.

Beale returned to the Waratahs following his stint with the Rebels and was instrumental in building towards the club's successful 2014 Super Rugby campaign, assisting two tries in the final. Having been one of the most consistent players over the years, 2015 was another successful year in terms of his form for the Waratahs leading to him being included Michael Cheika's 31 man squad for the Rugby World Cup in England.

In May 2016, Beale joined Wasps for the 2016/17 season and following a lengthy injury, Beale made his first appearance for his new club against Connacht at the Ricoh Arena.

Beale returned to the Waratahs after a successful stint at Wasps where he played in 12 Aviva Premiership games scoring 4 tries and 5 European Champions Cup games scoring 1 try. He missed out on appearing the 2016/17 Premiership final after scoring a try and injury himself in the semi-final win over Leicester Tigers.

He returned to the Waratahs after his stint in the Premiership. As of March 2020, he has played in three World Cups, played 92 Tests for the Wallabies and equalled Benn Robinson’s record of 148 Super Rugby matches for the Waratahs.

He’s also scored more than 50 professional tries during his career in Australia. In May 2020, Racing 92 confirmed that the Wallabies veteran would join the club in an undisclosed deal.

2011 IRB Player of the Year Nominee