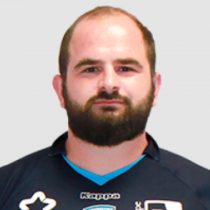 The massive Georgian unit has represented his country in the European Nations Cup since 2010 and signed for Toulon in 2011.

On the 11 February 2012 he made his debut for Georgia against Spain in the European Nations Cup before being named in Georgia's 2012 end of year tour squad.

Chilachava entered the 2016/17 TOP 14 final having been a mainstay in the Toulon front-row.

In June 2018, the product of Toulon’s famed youth academy, where he spent nine seasons, signed for Montpellier on a three-year deal.