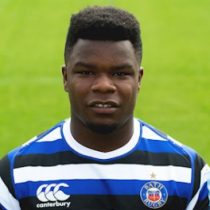 Davis is an explosive winger with an eye for the whitewash and is a former England U18s and U19s international.

He made a try-scoring debut for the senior side against London Irish in the Anglo-Welsh Cup in November 2017.

Davis was a regular in the Bath United team in the 2017 season and scored on his first team debut in the 26-22 victory against London Irish in November.

The explosive winger signed an Academy contract with Bath Rugby in December 2017.

Davis started the 2019/20 campaign in a rich vein of form, scoring three times in as many games in the Premiership Rugby Cup, with Anthony Watson, Ruaridh McConnochie and Joe Cokanasiga away with England at the Rugby World Cup and Semesa Rokoduguni injured at that point of the season.

In January 2020 he signed a loan deal with Championship side Ealing Trailfinders.