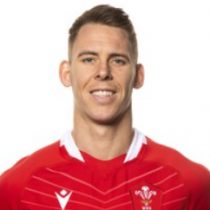 Williams came through the system at Waunarlwydd RFC before making a breakthrough at Llanelli and the Scarlets, where he has made over 115 appearances during two stints.

Williams was a member of the Wales U20 squad that played in the IRB Junior World Championship in 2011. Ever since returning from the JWC June 2011, he has been in and around the Wales National Squad.

He made his debut at full-back against the Barbarians in June 2012, going on to feature against New Zealand and Australia in that year’s Dove Men Series. He started in 3 pool games at RWC2015, but a foot injury sustained against Australia ended his tournament.

In the 2016 Summer Tour to New Zealand, Williams started in all three tests and scoring a try in the second at Wellington. In January 2017, he signed a two-year contract with European champions Saracens.

He starred during his two-year spell at the club, in which he scored 21 tries in 31 appearances and was integral in the English club’s 2018-19 Premiership and European titles.

He played in Wales' last 19 RBS 6 Nations games and became only the third Welshman to score a try in 4 successive RBS 6 Nations matches 2016-17. He was selected in his 1st British and Irish Lions tour in 2017 and at his time of selection had made 43 Welsh caps.

Williams started all 3 of the Lions test matches against the All Blacks and featured in 2 tests for Wales in 2017. He was again named for the Wales squad for the 2020 Six Nations with a total of 62 caps.

2021 saw him being named in the British and Irish Lions 37-man squad for their tour to South Africa. Williams featured in the first and third test for the Lions taking his test cap tally with the tourists to five.

On the international stage, scoring 16 tries in 72 Tests for Wales, where he has featured in two Rugby World Cups and won a Six Nations Grand Slam, while he has twice toured with the Lions, earning five Test caps.