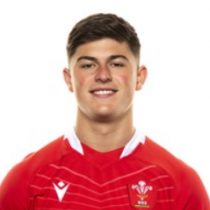 Having started his youth career with the Cardiff Blues, Louis Rees-Zammit moved to Hartpury College and from there to the academy of Gloucester Rugby.

He had a sensational start to his professional career as he broke into the Gloucester senior team during the 2019-2020 season, at the age of 18 the Welsh winger scored two tries and set up another during Gloucester's 36-3 demolition of Worcester in what could prove to be the performance that launches his career on to the biggest stage of all.

His pace is electric, his size already impressive and he clearly has an eye for the try line, as evidenced by his brace against Worcester that had scores of pundits and fans purring.

He could qualify for England on residency grounds but the U18 Welsh International revealed that he has no intention of switching allegiance.

As well as numerous achievements including becoming Gloucester Rugby’s youngest ever Premiership player, the club's youngest ever player in a European match, he also became the youngest player ever to score a hat-trick in the Premiership. Added to that, he was named as Premiership Player of the Month for December 2019.

He waited until October 2020 to make his debut away to France, while he added a first try at Test level against Georgia in the Autumn Nations Cup. His Six Nations debut followed in 2021, Rees-and he made an immediate impression, scoring an acrobatic try against Ireland in an opening victory. He scored twice against Scotland that same campaign and again against Italy. Wales would go on to win the Six Nations, Louis winning the title on his first attempt.

May 2021 saw him get selected into the British and Irish Lions 37-man squad for their tour to South Africa.

Although he did not crack the test team, he did score three tries in four appearances in South Africa. The Wales winger took all of three minutes to touch down for the first time on his debut, as he scored the opening try in the 56-14 win against Sigma Lions. He followed that up with thries against the Sharks and Stormers.


The speedster enters his second Six Nations tournament, in 2022, having scored 6 tries in 12 test matches for Wales.