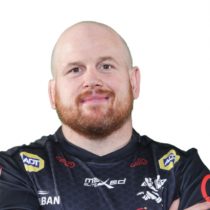 An outstanding performer from a young age, the tighthead has represented Western Province from U16 to U21. On the back of two Vodacom Cup seasons for WP and winning the Varsity Cup with Stellenbosch in 2010, Adriaanse was snapped up by Griquas where his performances elevated him to the Cheetahs Super Rugby team in 2011.

The prop was also included in Springbok squad for the 2013 Rugby Championship and end of year tour to Europe.

He joined the Sharks for the start of the 2014 season and was included in their squad for the 2014 Super Rugby season.

In August 2016, Adriaanse was called up to the Springbok squad after Trevor Nyakane was ruled out of Boks’ first two matches of the Rugby Championship against Argentina because of an ankle injury. The Springbok prop then signed for Top14 side Pau from the 2017/18 season on a three-year deal.

Known for his excellent scrummaging Adriaanse has proved to be a major hit in France with the six test Springbok becoming a vital cog int the Pau front row.