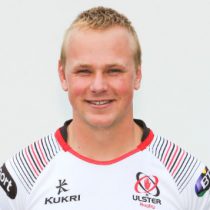 Marshall broke onto the scene in the 2010-2011 season and after a fine debut season with the full side, earned himself a full contract with Ulster.

Having played flyhalf for the early part of his career, Marshall made the switch to inside centre where he has flourished as a playmaking 12. Having represented the Ireland U20 side at the 2011 Junior World Championship, Marshall made the break into the full Irish set up at the end of November 2012 in the game against Fiji.

Marshall made his international debut in the 2013 Six Nations Championship against Scotland. He recently signed a contract extension with Ulster which will keep him with the team until the summer of 2018.

He has won 11 Ireland caps to date and has become a senior figure in the Ulster back-line. Marshall has been named in the Ireland squad to tour USA & Japan.

In November 2017, Marshall signed a three-year contract extension with Ulster, keeping him till the 2021 summer.

He had played a total of 1246 minutes for Ulster prior to the season being brought to a halt and had only come off on three occasions.