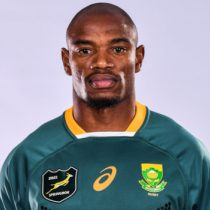 Nicknamed “the Finisher” by the Springboks' squad, Makazole Mapimpi has developed into one of the most free-scoring wingers in test rugby.

However, it wasn't an easy ride to get where he is now. Mapimpi is exactly the rags to riches story that was brought about by transformation in South Africa. He didn't attend one of South Africa's many prestigious schools, was never selected for a Craven week side and only broke through in South Africa at the age of 25.

Mapimpi grew up in Twecu, part of rural Tsholomnqa, just outside East London, the speedster lost his mother at a young age and didn't know his father with his brother and sister both passing away too and doesn’t have any immediate family.

His incredible rise to a Rugby World Cup winner started at Border in 2014 where he was a beneficiary of the union declaring bankruptcy. He was called into the Border Bulldogs squad, a side that plays in the second division of the Currie Cup, as one of several amateur players brought into the provincial set-up as a cost-saving measure.

Mapimpi quickly became a regular member of the senior squad some five years after starring as a u19 for the side. He made his Vodacom Cup debut for Border against the Sharks XV and was a star performer in their final match of the 2015 season against Boland Cavaliers when he scored a hat-trick of tries and took over the kicking duties and slotted three conversions and a penalty in the absence of the regular kicker clocking up a superb 24-point haul.

He scored an impressive 149 points in 54 games for Border between 2014 and 2016 before his excellent run of form caught the eye of the Southern Kings. He was brought into the Kings set up for the 2017 Super Rugby season and quickly made his mark scoring 11 tries in his debut Super Rugby season reaching the mark in just 14 games.

The Cheetahs pounced to bring the speedster to Bloemfontein following his incredible debut season with the Kings and once again he produced. He scored 4 tries in 10 Super Rugby games for the Cheetahs before scoring a further 10 in 13 PRO14 games.

However, ahead of the 2018 Super Rugby season, the Sharks announced that Mapimpi signed with the Durban-based side. Mapimpi was in excellent form for the Sharks despite a smaller return of 4 tries from 10 games in Super Rugby but he still managed to earn a test call up.

He made his test debut against Wales in Washington DC, in what was Rassie Erasmus' first test as the Springboks' head coach, and scored in the 58th minute on debut. His next test would game in August and by the end of 2018 he had four test caps to his name.

Again, his try tally with the Sharks was far less impressive than with the Kings and Cheetahs but he did manage to dot down five times in 16 appearances in 2019 and retained his place in the Springboks squad. He played three tests for the Springboks ahead of the Rugby World Cup, including a start in the draw in Wellington against the All Blacks and was retained in the squad for the tournament in Japan.

Mapimpi stamped down a marker ahead of the tournament scoring three times in the Boks warm-up game against the host's Japan and continued to perform throughout the competition as the Springboks' first-choice left-winger. He scored twice against Namibia, once against Italy and added to his three tries against Japan prior to the competition by scoring a pair in the Springboks' 3-26 quarter-final win.

He became the first Springbok to score a try in a Rugby World Cup Final after a lovely move down the blindside in the 74th minute saw Mapimpi sprint down the touchline and put in an excellent kick for Lukhanyo Am, who assisted Mapimpi for the score. South Africa would win the final beating England 12-32.

Mapimpi enjoyed a rip-roaring start to the 2020 Super Rugby season scoring five tries in six games before the season was called off. With the Sharks looking to hold onto key players, Mapimpi was granted a short-term loan away from Durban and he signed for Top League side Red Hurricanes.

As of November 2020, Mapimpi had scored 14 tries in 14 test matches for the Springboks.

He was included in the 46-man Springbok squad to take on the British & Irish Lions in 2021 and turned out for the South Africa A team who managed a 17-13 victory over Warren Gatland's charges.