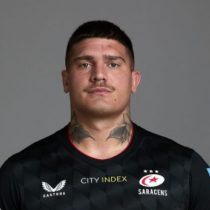 Riccioni is an Italian prop weighs 127kg and is 1.86 metres making him a real asset to any scrum. The front rower is extremely difficult to bring to ground and is even more difficult to scrum against.

He has impressed while representing youth sides at his club side Calvisano and was promoted into the first team.

Riccioni signed a deal with Benetton Treviso in 2017 and the following year took one step closer to a test debut as he was named as an apprentice player in Italy's 6 Nation squad.

As of December 2019, he has made 20 appearances for Treviso and has scored 5 points.

In February 2021, Riccioni signed a two-year deal with Saracens.