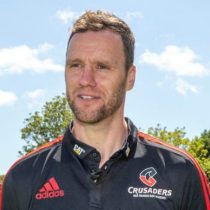 Mark Jones began his domestic career at Builth Wells Youth before joining the senior side. He was signed by Llandovery from Builth and in his first season of senior rugby was the highest try scorer in the Welsh League.

Jones joined Llanelli in 1997 and remained at the club until his retirement in 2010. Jones has represented Wales at U18, U19 and U20 levels and made his first team debut for Wales as a replacement against England in the 2001 Lloyds TSB Six Nations.

He was forced to retire through injury in August 2010 and took over from Simon Easterby as captain of Scarlets the previous season, received final confirmation from medics that his playing days are over. Jones enjoyed 12 seasons with the Scarlets and was granted a testimonial year by his region during the last year. A career Scarlet, Jones played 164 times for his region and scored 425 points (85 tries). He played his first Scarlets game against Saracens on 26 August 1998. He won a total of 47 caps for Wales, scoring 13 tries for his country and was part of the Grand Slam winning team in 2008 and the 2007 World Cup squad.

Following his retirement, Jones was announced as a skills coach for the Scarlets region on a two-year contract. This saw him coach skills both at first-team level and with a wider responsibility within the Premiership teams, Academy and age-grade pathways for the region

In 2012 he joined Wales set up, supporting Rob Howley at the 2012 autumn internationals and in 2013 he became interim attack coach during the Six Nations Championship. He also accompanied Robin McBryde on the 2013 tour of Japan.

In 2015 he became head coach of the Rotherham Titans in the Greene King IPA Championship, taking over from Lee Blackett but departed a year later. He took over as head coach of Colwyn Bay side RGC 1404 in 2016 as they moved into the Welsh Premier Division for that season

After a spell of three years at Eirias Stadium, Jones stood down as head coach of RGC. During the 2019 Rugby World Cup, Jones was offered a role coaching the Namibia national rugby union team in Japan, "working closely with the Namibia backs both prior and during the competition". He was joined by fellow ex-Wales players Dale McIntosh and Wayne Proctor.

Jones spent time in New Zealand in late-2019 before being named as the Crusaders new defence coach replacing Ronan O'Gara on a two-year deal. Jones will serve as defence coach under head coach Scott Robertson and be running the attack and the backs with Canterbury.

In 2020, he left the Crusaders after the Super Rugby Aotearoa season to join Worcester Warriors in England.