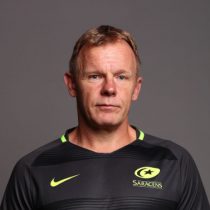 Mark McCall moved to France in 2007 to join the coaching staff at Castres and joined Saracens at the start of the 2009/10 season as First Team Coach and in that first season, helped guide the club to their first Premiership final.

In January 2011, following the news that Brendan Venter will be moving to the role of Technical Director, McCall moved into the role of Director of Rugby with the North London Club.

Capped 13 times by Ireland, the former inside centre coached Ireland U21s and Ireland A and was an assistant coach at Ulster for two years before being given the Head Coach’s job in 2004.

During his three seasons in charge of the province, they won the Celtic League in 2006 and he oversaw the development of nine of Ulster’s players into the Irish national side, the highest number since the game went professional.

McCall's Saracens went one better in 2015/16 by securing their first ever European Cup, beating Racing 92 in Lyon. It was an impressive achievement for Saracens who also became the first side to win the European Cup without losing a game.

In May 2018, McCall signed an undisclosed contract extension with the Saracens.

While McCall is frequently known as quiet and generally turns down interviews, his performances and widespread respect have also led to him being awarded the Aviva Premiership Director of Rugby in 2012/13, 2013/14, 2015/16 and 2018/19.

McCall continued coaching the club despite Saracens' relegation to the Championship for the 2020/21 season, due to salary cap breaches.

In April 2021, he signed a new deal to remain at the club for at least a further four years.