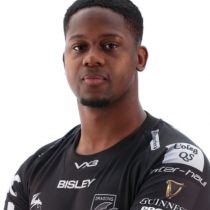 Nigerian born lock, Williams, who moved to Wales as a child is a tall physical second rower who went to Newport High School.

Williams went on to play for Caerleon and Ebbw Vale rugby clubs while in the Dragons Academy squad. Williams earned his first taste of international rugby with the Wales u18s and was included in the Wales under-20 Six Nations squad, making his debut in their opening match against Italy.

A debut for Dragons followed his u20s debut as he made his first appearance in the PRO14 against Leinster Rugby in September 2017.