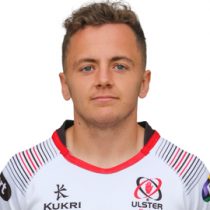 Primarily a flyhalf, Michael Lowry burst onto the scene for Ulster during an injury crisis for the side in October 2018.


He made his first senior start at fullback for Ulster in a high-pressure European opener against Leicester Tigers.


Lowry had made his senior debut off the bench against Munster a week earlier but put in a fine fine performance in his first start.


The highly-rated fly-half went from captaining RBAI to three Schools Cup titles in a row to being relegated to the sidelines with a persistent groin injury for the whole of the 2017/18 season, halting what was a fledgling career.


His maiden year in the Ulster Academy was a wash-out, and what would have been a guaranteed spot in the Ireland Under-20s squad for the World Cup ended up being a cameo at the latter end of the tournament.


Lowry has since become and regular in the Ulster squad following a superb start to his senior career.


His 159 metres gained against Racing 92 in the 2018-19 season was the most gained by an Ulster player in European competition since Opta began collecting the data.


His outstanding form earned him a senior Ulster contract in the summer of 2019.

Coming off the bench in his first two games o the 2019/2020 Pro 14 campaign, the 21-year-old eventually got a start against the Cheetahs, playing an impressive 62 minutes.