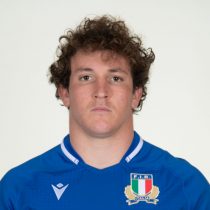 Born in Rome, Lamaro joined Benetton Treviso as a permit player before signing a deal that will see him with the outfit until 30 June 2022.

He started playing for Roman club Unione Sportiva ASD Primavera Rugby and after a few seasons he went to represent Lazio Rugby where he played in the U18 championship.

The following year, Lamaro made his Serie A debut with US Primavera but in the summer of 2016 he left the club and moved to Petrarca Rugby, a club with which he won the Scudetto, a decoration worn by Italian sports clubs that won the annual championship of their respective sport in the previous season. As well as being named the best player in the league (younger athlete to have won this title since 2011, year of its establishment)

Lamaro made himself the protagonist with the shirt of the Italian National U20 guiding it also as captain on the occasion of the Six Nations and World Championships 2017 and 2018.

The flanker made his full international debut in November 2020.

In October 2021, he was made captain of Italy's national side.