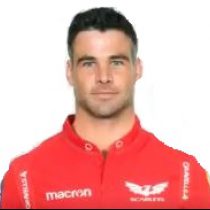 The hugely physical Phillips from Carmarthenshire has established himself as one of the World's best scrum halves.

Compared to the Welsh great Terry Holmes, Phillips has had several clubs including the Cardiff Blues, the Ospreys, Bayonne and current club Racing Metro. The scrumhalf has proven a vital cog in the Welsh wheel and has been crucial to their recent success.

The 2009 Lions tourist stands at an imposing 6 foot 3 inches and often acts as a 4th flanker. After being selected for the 2013 British and Irish Lions squad, the abrasive Phillips was selected to start the first and third tests against Australia, which were both won by the tourists.

He then began a life in France where he played for Bayonne for two seasons which saw him gain a further 49 caps and scored 25 points. Finally in 2013 he signed with Racing Metro and is likely to end his time with the club with a European Champions Cup final under his belt.

In May 2016, Phillips signed with Premiership side Sale Sharks and is set to join his new team for the 2016/2017 season.

He had retired from international rugby as Wales' most capped scrum-half in 2015 and carried on playing for Racing 92 in the French Top 14 and then Sale Sharks in the Aviva Premiership.

In April 2017, Phillips announced that he will retire from professional rugby at the end of the season. But that wasn't the end for Phillips, who answered an SOS call from Scarlets head coach Wayne Pivac and decided to come out of retirement to provide injury cover during their two-week trip to South Africa in the PRO14.