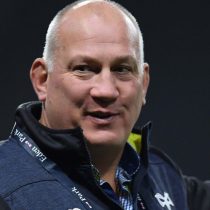 Mike Ruddock, played in the back row for Blaina, Tredegar and Swansea, making 119 appearances for Swansea and scoring 43 tries. He also played for Wales under-16s and Wales B, but his playing days were ended prematurely by an accident at work in 1985. Working as an electricity linesman, he fell from a pole, suffering serious injuries including three compressed vertebrae and a fractured skull.

He began his career as a coach at Blaina and guided them to a Monmouthshire Premier League title & a Ben Francis Cup victory, he later coached Cross Keys and had a spell in Ireland with Bective Rangers. As coach of Swansea, he recorded a 21–6 win over the touring Australians in 1992 and won Welsh league titles in 1992 and 1994 and the Welsh Cup in 1995. In 1997, he again moved to Ireland as director of coaching at Leinster.

He remained at Leinster until 2000 before heading back to Wales to coach Ebbw Vale before joining the Dragons in 2003. He spent just one season at Dragons before he was named as the Wales head coach. He was given control of the Wales team to face Romania in the run-up to the 2003 Rugby World Cup, a match which Wales won 54–8 – their first win in 11 games.

In his first season, Wales completed the Grand Slam in the Six Nations Championship for the first time since 1978. He received an OBE in the 2006 New Years Honours List. On 14 February 2006, Ruddock resigned as coach of the Welsh National Team when contract negotiations with the WRU broke down. He temporarily left rugby following his departure from the Wales team, but soon returned to the game as an assistant coach of Mumbles RFC.

Ruddock's return to the mainstream was announced on 1 May 2007, when, two days after narrowly avoiding relegation from the Guinness Premiership, Worcester Warriors appointed Ruddock as Director of Rugby, replacing John Brain.

Ruddock took Worcester to the Amlin Challenge Cup Final as well as the Middlesex 7's final at Twickenham before their luck ran out. Following the Warriors 12-10 defeat to Leeds Carnegie on 25 April 2010, the Worcester were relegated from the Guinness Premiership, and Mike Ruddock subsequently resigned from his post as Director of Rugby on 28 April.

It was announced on 4 August 2010 that Ruddock was appointed as head coach of the Ireland Under-20 Rugby Union Team. He left the role with Ireland in 2014.

In November 2019, he was appointed as Ospreys' new performance director until the end of the season, and was later signed on a permanent basis.