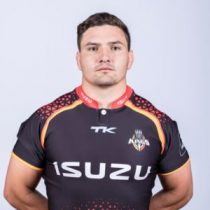 A product of Grey High School in Port Elizabeth, Willemse would go on to play for Eastern Province U18 and U19 before heading to the University of Cape Town in 2012. Relatively unknown to many, it was 2013 when the dynamic hooker made himself known to the rugby world.

He represented UCT in the Varsity Cup, debuted for Western province in the Vodacom Cup, South African U20 selection, played WP U21, and got his first senior Currie Cap all in one year.

In 2016 Willemse was loaned off to the Eastern Province Kings due to lack of game time with Western Province.

He impressed at his time in Port Elizabeth and was rewarded with a contract with the side.

The feisty hooker became an integral part of the Southern Kings Super Rugby side.

He made 12 appearances for the Kings during the 2017 Super Rugby season before he moved to Johannesburg and joined the Lions making his debut for the side in the opening Currie Cup round against the Pumas.

In August 2017, the hooker was named the first Southern Kings captain in the PRO14 Championship.

He joined PRO14 rivals Edinburgh ahead of the 2019/20 campaign on a two-year deal.