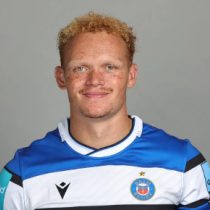 A product of the Bath Rugby Pathway, Reid made his senior debut for Bath in January 2018 against Newcastle Falcons in the Anglo-Welsh Cup. Bath won 21-8 at the Rec.

The former Beechen Cliff pupil came through the ranks from the U18s, to the Senior Academy before signing a first team contract ahead of the 2019/20 season.

A dynamic figure, Reid is a powerful ball carrier with a strong defensive skill set and will look to continue his progression in the Blue, Black and White.