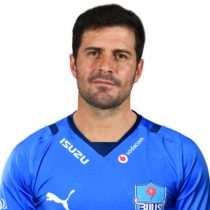 The Bulls pivot shot to prominence in 2009 when he came on for the Boks to slot a 55 metre penalty in injury time which clinched the series against the British Lions. One of the most accurate goal-kickers in Springbok history, he guided the national team to the Tri-Nations title in 2009 and won consecutive Super Rugby titles with the Bulls.

He did however experience a dip in form, allowing other, younger fly halves to move ahead of him in the pecking order. In 2013 he was signed by French Top 14 side Stade Francais.

Recent excellent performances for Stade Francais have led to an inclusion in the Springboks extended training squad and he remains an option for Heyneke Meyer at the 2015 Rugby World Cup.

Steyn made one appearance for the Springboks during the 2015 Rugby World Cup and continues to be regular in the Stade Francais side.

After 104 appearances for Stade Francais, Steyn signed a new one-year deal with the Paris based side - with an option of an additional year.