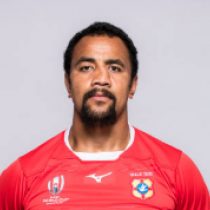 Manu played first-class rugby before he had even played club rugby. A nephew of former Australian test loose forward Daniel Manu, he played for New Zealand Secondary Schools in 2005 and 2006, and for New Zealand under 19 and under 20 teams.

He made his Super Rugby debut for the Crusaders in 2008 and was first selected for the Highlanders in 2010.

He is a strong running number 8 who brought explosive power to the Highlanders back three.

The back-row joined Edinburgh from the Highlanders ahead of the 2015/16 season, making his debut against Leinster at Meggetland in the season opener.

Edinburgh Rugby confirmed Manu will leave the club at the end of the 2016/17 season where he joined Benetton Rugby.

After being diagnosed with testicular cancer, Manu took time off rugby for treatment and recovery, remarkably he made a full recovery and returned to the game where he was named as the Tongan captain ahead of the 2019 Pacific Nations Cup.

In August 2020, he left Benetton and signed for Mitre 10 Cup side Otago.