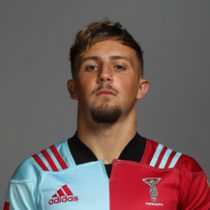 Son of former Ireland captain Rob Saunders, Niall was born in Chertsey, Surrey and went on to skipper Epsom College before joining the Harlequins youth Academy.

Saunders represented Ireland at U18, U19 and U20 levels representing Ireland at the 2016 and 2017 U20 World Championships.

After being released from the Harlequins Academy at the end of 2016/17 season due to medical reasons, Saunders returned to Harlequins and secured a new contract in the Academy in January 2018.

Saunders made his debut for the Club in the 2017/18 Anglo-Welsh Cup match against Worcester Warriors.

In February 2018, he signed a new deal with Harlequins. Following his signature, he only made one appearance against the Worcester Warriors.

In the 2018/2019 season he further struggled for game time only appearing for 168 minutes the entire season.