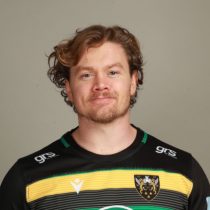 Born on 12 November of 1992, Auterac is a dynamic front row forward comfortable on both sides of the scrum. A graduate of the Oaklands College rugby program,

Auterac joined the Saracens academy at the beginning of the 2011-12 season and made his debut later that year.

Lack of game time then forced the 120kg forward to join Bath Rugby from Saracens ahead of the 2014/15 season.

He made his Premiership debut in 2012 against London Wasps, the same year in which he featured for England U20s in the Six Nations Championship.

The young loosehead prop combines incredible strength with the ability to cover a lot of ground around the field. It was his ability that secured him regular game time with Bath's success 2014-2015 Premiership season.

It was confirmed on March, 16th 2018 that Auterac would be joining the Harlequins and he made his debut later that year against his former side, Bath.

He spent two years at Harlequins before switching to Northampton Saints.