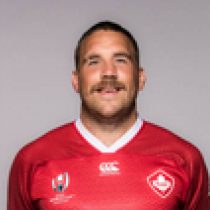 A powerful centre known for his hard running and tackling, Blevins has become a pivotal member of the Canada national squad.

Blevins is strong in contact and has a solid fend and decent pace, which makes him difficult to bring down for any opponent. Since making his debut against Japan in 2009, he has consistently improved on the international set up, and has represented Canada at the 2015 Rugby World Cup.

In January 2017, he was named in the Canada squad for the 2017 Americas Rugby Championship.

The test veteran heads into the Pacific Nations Cup with 59 test caps and will look to feature in his second Rugby World Cup after making 3 appearances in England.