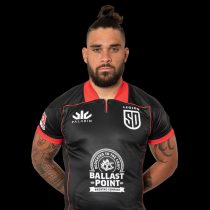 Born in Hawaii and of Samoan decent, Psalm Fa'afoisia Pulemagafa Wooching is hard flanker who started his venture into professional sport as college football for the University of Washington Huskies, playing as a fullback and linebacker.

Despite significant interest from NFL teams, Wooching announced that he would be pursuing a career in professional rugby, and not football, ahead of the 2017 NFL draft.

His decision paid off as he was selected in the United States squad ahead of the 2018 Americas Rugby Championship.

He made his test debut at blindside flank on 17 February 2018 against Chile in Fullerton.

Later that year, Wooching signed a contract to play for Rugby Viadana in the Italian Eccellenza for the 2018–19 season. He left the side in June later that year as his contract was cancelled by mutual consent.

In late 2018, Wooching signed with the San Diego Legion of Major League Rugby for the 2019 season. By April 2020, Wooching has 4 test caps to his name with the last coming against Samoa in 2018.