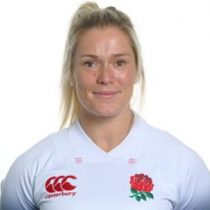 Burford first picked up a ball when six and was in the same team as her mother, Renata, and her sister, Louise, for a season at Medway RFC, where Rachael spent the first 10 years of her career.

Chatham-born Burford also played in the 2006 15-a-side World Cup, the 2010 tournament in England, started the 2014 final and became England’s Player of the Year.

A talented sevens player, Rachael took part in the 2009 and 2013 Sevens World Cups.

She heads into the 2017 Women's World Cup with 67 Test caps worth of experience.