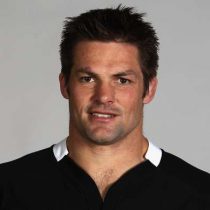 One of the greatest players to ever pull on the All Blacks jersey and in fact play the game, Richie McCaw terrorised breakdowns for over a decade in the All Blacks jumper as he captained his country to two Rugby World Cup titles.

Growing up on his parent's farm, Richie started flying gliders with his grandfather J H 'Jim' McCaw, a Tempest pilot during World War II and played rugby for the local Kurow rugby club. McCaw attended Otago Boys' High where he was the head boy and played in the school's 1st XV.

He missed out on selection for the New Zealand Secondary School XVs but was selected in the New Zealand under-19 squad, which won the world championship in Wales. During that series, McCaw realised his All Blacks dream could be attainable and the following year he was selected in the New Zealand under-21 squad and debuted for Canterbury in the National Provincial Championship (NPC) against North Harbour. On 31 March 2001, he made his Super Rugby debut with the Crusaders, playing a few minutes in a losing effort against the Hurricanes.

That year he only played twice for the Crusaders, both times as a substitute, for a total of just eight minutes playing time but did play a full season with NPC champions Canterbury and captained the New Zealand Under 21s.

Although the then 20-year-old McCaw had only played seventeen matches for Canterbury, John Mitchell, the new All Black coach, selected him for the 2001 end of year tour to Ireland, Scotland and Argentina. This led Josh Kronfeld, a former All Black openside flanker, to criticise the selection: "You might as well just give All Black jerseys to everybody. The fact they picked guys off one NPC season is bloody incredible".

McCaw quickly silenced Kronfeld on his debut international test against Ireland at Lansdowne Road on 17 November 2001. His first touch of the game resulted in a knock-on when he was hit in a tackle and New Zealand were trailing the Irish 16–7 at half-time. In the second half the All Blacks recovered to win 40–29 and McCaw was named man of the match, receiving a standing ovation at the post-match function. McCaw played all three tests on the tour, with the All Blacks beating Scotland 37–6 and winning 24–20 against Argentina. At the end of season rugby awards, McCaw was selected as both the New Zealand Rugby Football Union Under-21 and Air New Zealand NPC Division One Player of the Year.

In 2002 McCaw was voted as Newcomer of the Year by the International Rugby Players Association. By 2003, McCaw was a test regular for the All Blacks and helped the All Blacks Blacks retain the Tri-Nations title and regained the Bledisloe Cup for the first time since 1997. McCaw went to his first World Cup in 2003 and played every game as the All Blacks reached the semi-finals where they lost to the Wallabies, McCaw was later named the All Blacks player of the year.

He was made captain of the All Blacks at the age of 23 for the first time against Wales as regular captain Tana Umaga was rested. The All Blacks would beat the Lions in 2005 with McCaw starting the first two tests and 2006 he took over the captaincy on a permanent basis. cCaw led the Crusaders to the Super Rugby title again in 2006 and was named as the World Player of the Year that same year after being shortlisted three times prior. McCaw made just four appearances during his second World Cup in 2007 as the All Blacks were surprisingly knocked out by France in the quarter-finals. McCaw won another Super Rugby title with the Crusaders in 2008 and made his debut for the Barbarians that year against Australia. Despite a relatively poor season from the All Blacks McCaw was named the IRB International Player of the Year for a second time in 2009.

During the All Black's third Rugby World Cup pool match against France, McCaw became the first All Black to reach 100 test caps. However, it was also during this match McCaw re-aggravated his foot injury. In order to rest his injury, he was forced to skip the more physical aspects of training and miss the All Blacks' final pool match against Canada. Ahead of the quarter-final against Argentina McCaw decided against having another x-ray. McCaw was able to continue to play throughout the World Cup tournament and lifted the Webb Ellis trophy after a tense 8–7 victory over France. All Black coach Graham Henry stated after the final "He can hardly walk and how he played today I just don't know," and he acknowledged the All Blacks probably would not have won without him. Following the World Cup x-rays showed that the screw in his foot, necessary to stop the deterioration of the original injury had caused a second fracture.

In 2012 he became the first player to achieve 100 test victories – an incredible record given he has only lost 12. In the first half of 2013, in order to rest his body and improve his chances of playing in the 2015 Rugby World Cup McCaw enforced the sabbatical clause in his NZRFU contract. As a result, he only played the latter rounds of Super Rugby, and missed the 2013 French Test Series.

He later returned to captain the All Blacks as they successfully defended the Rugby Championship. During this campaign, McCaw equalled (with Brian O'Driscoll of Ireland and John Smit of South Africa) the record as captaining the most test matches (83). McCaw subsequently overtook this record when playing in Japan on 2 November 2013. Following the All Blacks victory over the Springboks in Ellis Park, McCaw has played and won at every major Rugby Test stadium. McCaw captained New Zealand for the 100th time on 22 November 2014 in the end of year international against Wales.

In 15 August 2015, McCaw surpassed Ireland's Brian O'Driscoll world record, as the most capped rugby player when he won his 142nd cap against Australia in the Bledisloe Cup. He would go on to hold this title for five years until 31 October 2020 when Welsh captain Alun Wyn Jones got his 149th cap.

On 31 October 2015, McCaw captained New Zealand to retain the Rugby World Cup after a 34–17 win against Australia in the final at Twickenham after the tournament he confirmed his retirement from all forms of rugby. In December 2011, then Prime Minister John Key revealed that he had asked McCaw about the possibility of a knighthood in the 2012 New Year Honours, but that McCaw had turned it down.

His career in numbers