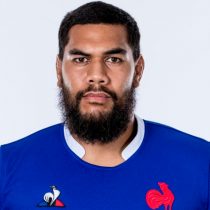 Taofifénua's rugby career began in 2005 while playing for Limoges. He later moved to play for Clermont in the 2007–08 Top 14 season.

In 2012 he made his France senior debuted against Argentina. After the 2013–14 Top 14 season, where Perpignan was relegated, Taofifénua signed with Toulon, who were both European and Domestic champions. His first Toulon appearance came on 15 August 2014 against Bayonne, in a 29–15 victory.

He played in 29/35 games during the 16/17 season, scoring three tries. His tireless work in the engine room for the French giants has earned him a starting role in the TOP 14 final.

Taofifienua was named in the French squad to tour to South Africa for a three-match Test Series, he had made 8 previous appearances for the national side ahead of the competition.

He continued to perform for Toulon and France and took his test cap tally 14 during the 2019 Six Nations but missed out on a selection for the Rugby World Cup.

Taofifenua regained his place in the French squad after the World Cup and took his test cap to 25 by the end of the 2021 Six Nations.