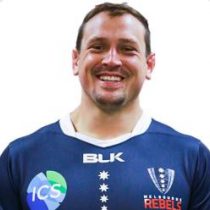 Ruan Smith is a prolific junior representative prop who graduated from one of the world’s toughest rugby nurseries in South Africa’s Western Cape.

Switching between Brisbane and Cape Town during his late teens, Smith became one of few players to represent two countries at schoolboys’ level when he was picked for the Australian and South African sides in consecutive years.

Since then, he has been part of the Stormers, Reds and Force Academy systems, earning his first Super Rugby caps for the Western Australian franchise in 2012.

Smith left the Brumbies at the end of the 2016 Super Rugby season to join Toyota Verblitz in Japan's Top League.

In December 2017 he was named in the Sunwolves Super Rugby squad.

In February Smith left the Sunwolves squad for family reasons, and subsequently signed with the Reds.

Following 27 appearances and two seasons with the Reds, Smith left Queensland to sign with the Melbourne Rebels in 2019.