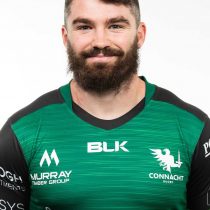 Born and raised in London, Anrold played football and ran the 100 metres before being awarded a rugby scholarship to attend Cranleigh in Surrey where director of rugby Andy Houston became a mentor.

Harlequins were keen to bring him into their academy, but as a scrumhalf. Having played for the Ireland Under-18s and under-20s, he opted for Ulster in 2015.

He made his PRO12 debut as an 18-year-old against Newport Gwent Dragons at Rodney Parade in March 2015 and completed the season as Ulster Rugby's Academy Player of the Year.

In February 2016, Arnold made the move to Munster from Ulster where he made 14 senior appearances including his Champions Cup debut, starting on the wing against Oyonnax in Charles Mathon in January.

The former Exiles representative joined Munster on a two-year deal at the beginning of the 2016/17 season. He sustained a knee injury during the pre-season training and was ruled out for the opening period of the 2016-17 season.

In 2018 the promising centre signed an extension that would see him remain at the club until 2020.

Arnold was named as the 2018 Munster Rugby Young Player of the Year in April 2018.

Six months later, he was called into the Ireland squad ahead of the November Tests, and made his debut against the United States when he came on as a replacement for Will Addison at half-time.