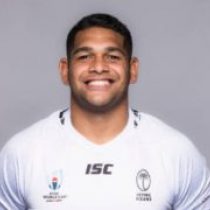 Educated at the Camborne Science & International Academy, Sam later attended Truro College and was a member of the team that in 2009 won the Daily Mail RBS U18 Cup at Twickenham.

Gifted and not at all shy to put his body on the line, Sam also in 2013 won the first of his three caps for Fiji, whilst other honours include being a County Championship winner with Cornwall in 2016.

Joining the Navy early in 2017, Sam has not only played against the Army in the annual Babcock Trophy match contested at Twickenham, but has also played for the UK Armed Forces side.

Having formerly played for Camborne and Plymouth Albion, Sam had a brief spell with Racing Metro in Paris before signing for Cornish Pirates in December 2017.

The front rower’s career sky-rocketed in 2019 as his form earned him a loan spell with Toulouse, a French Top 14 title, and a spot on the plane to the 2019 Rugby World Cup with the Flying Fijians, before he arrived at Franklin’s Gardens at the close of the year.

Matavesi has earned 15 international caps for Fiji so far (as of May 2021), while also balancing his rugby with a military career in the Royal Navy – the Able Seaman’s stationing at RNAS Culdrose has already seen him feature in three of the annual Babcock Trophy clashes with the Army at Twickenham, as well as earn the Cossack Sword award in 2018 and UK Armed Forces Sportsman of the Year award in 2020.

After 27 appearances and three tries in Black, Green and Gold by the end of May 2021, Matavesi signed a new deal with Northampton Saints which sees Matavesi stay in Northampton for the 2021/22 season and beyond.