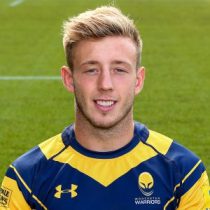 Olver made his senior debut for Saints when he came off the bench against Gloucester Rugby in 2013 & his Aviva Premiership debut the following season, coming on as a replacement against Leicester Tigers in May 2015.

In May 2017, Worcester Warriors captured the signing of young Northampton Saints fly-half Olver.

Peterborough-born Olver earned a professional contract at Franklin's Gardens in March 2013 and has helped Northampton Wanderers to three Aviva A League finals in the last four seasons, having kicked 16 points in last Monday's final to help them defeat Gloucester United to win the 2016/17 title.

During his time at Saints, Olver has made 13 first-team appearances while also having spent time on dual registration at Birmingham Moseley, where he featured against Warriors in the 2014/15 Championship.

On the international stage, Olver has represented England Under 18s and also made four appearances for the Under 20s in the 2014 Six Nations, before helping them win the Junior World Championship later that year.