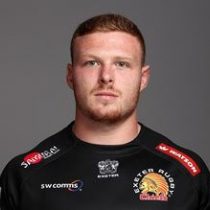 Simmonds was a late starter to the game of rugby, beginning his playing days at the U16 level. He has played for Teignmouth Community College, Teignmouth and then Torquay as a flanker, but he is also partial to playing amongst the backs at either wing or centre.

Even as a late bloomer in the game, he has championship experience, have a dual registration with Cornish Pirates and Plymouth Albion for the 2015/16 season and was shared between Pirates and Exeter Chiefs for the 2016/17 season.

February 2017 saw the Chiefs academy sign a new two-year deal with the club, making his Premiership debut the following weekend against Wasps.

Simmonds was one of Exeter's standout performers early on in the season and earned his first call-up into the England squad for the November Tests against Argentina, Australia and Samoa.

Simmonds was included in England's 2018 Six Nations squad and looked to add to his 3 Test caps that he earned in 2017.

2020 was a big year for Simmonds and Exeter as they hoisted both the Premiership and Champions Cup trophies.

In May 2021, Simmonds, with 7 England caps to his name, gained selection for the 2021 British & Irish Lions tour to South Africa.

Premiership Discovery of the Season 17/18, European Player of the Year 19/20