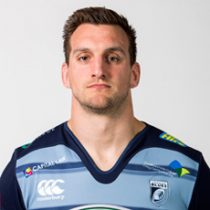 Like his compatriot Alex Cuthbert, Warburton was born to an English father and a Welsh mother. Warburton is a friend of Welsh footballer Gareth Bale and once had a trial with Cardiff City. Warburton’s leadership is notable as he has captained Wales from under 18’s to seniors.

Warburton was immediately impressive for Cardiff in his debut season of 2009, so much so he was selected for the Wales squad that toured North America, making his debut off the bench against the United States. Warburton became Wales’ second youngest captain when, at the age of 22 and 242 days, he captained his country against the Barbarians.

Warburton retained Wales’ captaincy and captained the principality during the 2011 World Cup. Warburton is widely regarded as one of the worlds best openside flankers. Warburton is an excellent classic openside who combines outstanding defence and work at the breakdown with a strong carrying and link game.

In 2013 Warren Gatland chose him to captain the 2013 British and Irish Lions on their tour to Australia, which they eventually won to secure a first series victory in 12 years. Warburton was part of the Welsh squad for the 2015 6 Nations and was also called up to represent his country for the 2015 RWC.

After making 96 appearances for the Cardiff Blues, the Wales captain signed a new National Dual Contract with the region in October 2016. Warburton stepped down as Wales captain after six years and 49 matches in charge, he is in line to make his 70th appearance against Italy in the 2017 Six Nations encounter.

In April 2017, Warburton was announced as the Lions captain for the 2017 tour of New Zealand. Becoming only the second man to captain a Lions squad for a second time. At the time of selection, Warburton had 84 Wales caps and 4 Lions caps.

Warburton led the Lions to Series draw against the All Blacks and in doing so became the most successful Lions captain.

In July 2018 Warburton announced his retirement from all forms of the game at the age of 29 following his struggle to recover from neck and knee surgery.

He made 175 appearances for the only club he represented, Cardiff Blues.

Warburton retired with 74 test caps for Wales, captaining the side a record 49 times. He also led the side to consecutive titles in 2012 and 2013 with the former being a Grand Slam.

He also earned 5 test caps for the British and Irish Lions on two tours, both times as captain and retires as the most successful Lions captain.