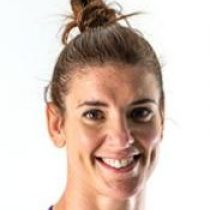 Sarah, who was born in North Shields, works as RFU University Rugby Development Officer for the South West and is based at the University of Bath.

An MBE for Services to Rugby and becoming the 2016 World Rugby Women’s Player of the Year have duly rewarded Sarah for her skill, dedication, determination and persistence in recovering from long-term injuries to reach 85 caps during her ten years at top level.

Only four players have appeared more times for England. She led the side throughout the 2016 Six Nations and all three matches in the Rugby Super Series at Salt Lake City in July.

She also captained Red Roses in the four autumn games that produced three wins, including the 39-6 triumph over Canada in the final match at Twickenham Stadium in late November.

A celebrated England captain, she not only inspired the team to a 32-0 win over Scotland last February but also scored her 18th Test try.

She had played rugby league as a nine-year-old at Goathland Primary School, attended Longbenton Community College and studied Sports Science and Mathematics at Loughborough University.

As a player, she also won the British Universities Championship and captained Lichfield from 2005-09.

Having been named in the 2017 England 6 Nations squad, Hunter has received a call-up for the 2017 Women's World Cup, where she will add to her 93 caps and 19 tries.