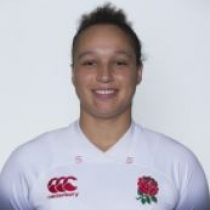 After joining Harlequins Women at the beginning of the 2016/2017 season, the front row quickly established herself as a firm fan favourite. It didn’t take long for Brown to win her first international cap as she made her England debut in 2017 against Canada.

As of August 2021, the Red Roses international has featured 24 times for her country, scoring nine tries and producing a player of the match performance in the Premier 15s final as Harlequins defeated London rivals Saracens Women 25-17 at Kingsholm Stadium in Gloucester.

In August 2021, she signed a new deal with Harlequins Women.